South East Queenslanders are urged to plan ahead later this month, with track closures and changes to train services required for 10 days from Easter due to important Cross River Rail works.

Cross River Rail Delivery Authority CEO Graeme Newton said all lines into the city would be impacted from Good Friday (15 April) to Easter Monday (18 April), while impacts would remain in place on the Beenleigh and Gold Coast lines until Sunday 24 April.

“Cross River Rail will transform the way we travel in the future, but right now construction does mean there will be track closures and changes to train services,” Mr Newton said.

“We appreciate some people will be inconvenienced and we apologise in advance, but the scheduled closure will mean crews can undertake major works safely and efficiently in the rail corridor.”

Mr Newton said the works were vital to integrate Cross River Rail into the wider network, with works to take place on the Shorncliffe line and Mayne Yard in the north, and on the Beenleigh, Gold Coast and Cleveland lines in the south.

“One of the most important pieces of work includes lowering more than 250 metres of track south of Dutton Park station in preparation to install cross overs later in the year, which will allow trains to move between tracks and increase network flexibility,” he said.

“While this work will be continuous over the entire 10-day period, works will take place on other parts of the network to make best use of the closures.” 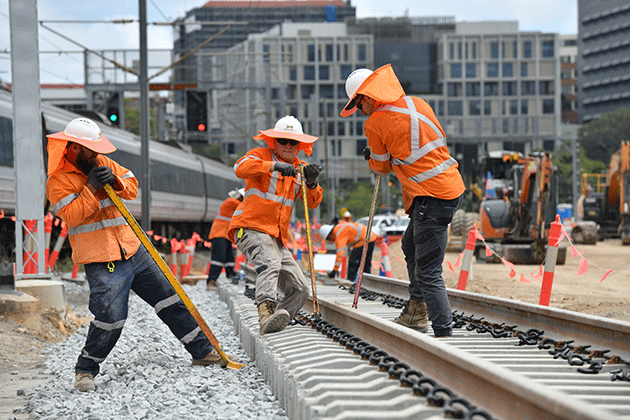 Head of TransLink Sally Stannard said plans were in place to minimise impacts as much as possible.

“We have been working closely with Cross River Rail and Queensland Rail to ensure people can still get to where they need to be during the track closures, including through replacement bus services and express buses into the city during peak times,” Ms Stannard said.

“Customers on the Beenleigh and Gold Coast lines in particular should make sure they plan their travel in advance as disruptions on these lines will extend beyond the Easter weekend to the start of the new school term and during the work week.

“However, it is worth noting that trains will run to a public holiday timetable on ANZAC Day (25 April), with additional early morning services for customers to attend the dawn service.”

With some local roads impacted around Cross River Rail sites, motorists are also urged to be patient and allow extra time to travel.
To learn more about Cross River Rail and travel changes, visit Travel Checker.

Train and replacement bus service times may be different during the 10-day closure. To plan your travel to and through Brisbane, visit TransLink’s journey planner.