Maintaining momentum on our major infrastructure projects is critical, and there is none bigger than Cross River Rail.

Cross River Rail is boosting the Queensland Economy by $4.1 million per day, supporting a workforce of over 2,400 and providing work for more than 400 Queensland companies.

Two roadheaders are now at work at the Cross River Rail’s Woolloongabba worksite, tunnelling in two different directions from a station cavern that is already 20 metres deep.

With two roadheaders now at work, tunnelling progress has doubled at our Woolloongabba site, with one machine heading north beneath Vulture Street and the other tunnelling towards the south beneath the South East Busway.

The roadheaders are tunnelling roughly 1.5 metres a day and with both these machines at work, over 55 metres of tunnel has already been excavated. 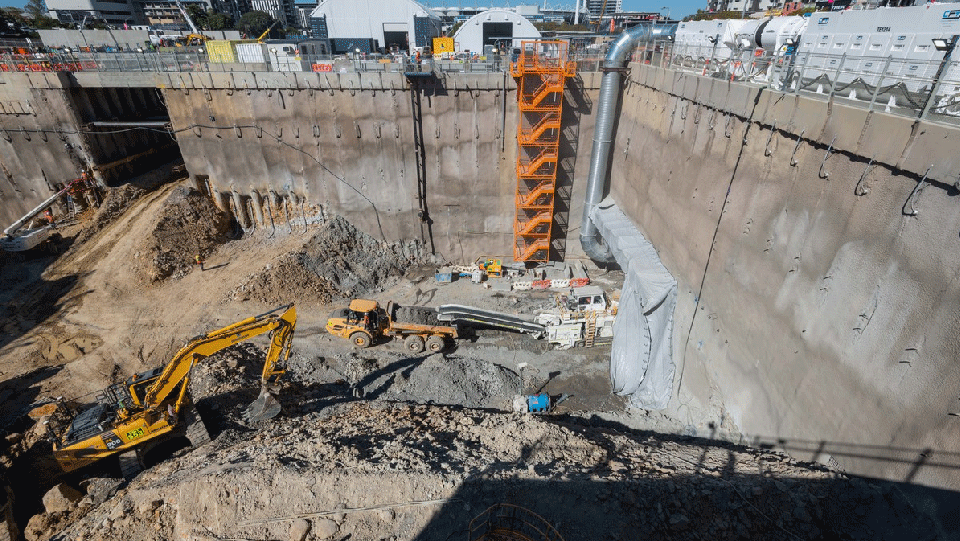 In addition to tunnelling work, there is plenty more construction action at the project’s massive 4.0-hectare Woolloongabba work site.

Blasting through the Brisbane Tuff and Neranleigh Fernvale rock under the Woolloongabba site, will help speed up excavation works over the next few weeks.

A large spoil shed is also being erected and like much of the work on this site, is being built by a local Queensland company, in this case IDEC who have secured a $2.4 million contract to build the giant construction sheds already built at the Roma Street and Albert Street worksites.

Woolloongabba will also be the launch site for two enormous Tunnel Boring Machines, which are currently being refitted by Herrenknecht, another local subcontractor, on Brisbane’s northside.

These tunnel boring machines will be delivered to Woolloongabba late this year and will take over tunnelling the projects twin underground tunnels to the North from January next year.

These are just some of the examples of Queensland companies benefitting from this government’s $5.4bn investment in a project that will support our economy right now when we need it most, and will change forever the way we travel across South East Queensland.