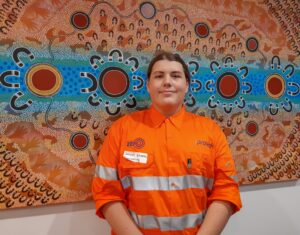 Samuel Scheeres  will spend half of his traineeship gaining firsthand experience working on the project – while spending the rest of the time studying.

Following in his father’s footsteps, Samuel was inspired to pursue a trade in his home town – Brisbane.

As part of his traineeship, Samuel will work on the project’s 1350-tonne TBMs and 115-tonne roadheaders, which are excavating the project’s twin tunnels below Brisbane.

“I’m excited to be part of working on such an iconic project in my home state,” Samuel said.

“I’ve always leaned towards STEM subjects at school, so I am excited to be learning from experienced engineers and receiving a certification at the end.”

When Samuel completes his traineeship he will receive a nationally recognised qualification – Certificate II in Engineering – Mechanical Trade.

Meanwhile, recent engineering graduate Bhosten Savage has started his career on the Cross River Rail project as part of the Woolloongabba tunnel team. 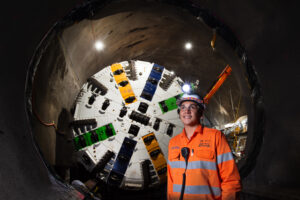 Bhosten graduated from a Bachelor of Urban Development (Honours) majoring in construction management.

He is continuing his study with a Bachelor of Law (Honours), while working full-time on the project.

Bhosten is a descendant of the Poruma, Mauar and Erub Islands in the Torres Strait and has ancestry from the Bidjara and Dunghutti nations.

Samuel and Bhosten are great examples of how Cross River Rail is providing career opportunities for high school and university students right here in Queensland.